“The beauty of this collection lies also in the scattered seeds of monologue, confessional and anti-poetry,” writes Utpal Chakraborty.

How do we define rituals? Are they customs or traditions or faith practices? Is it necessary to append some religious connotations to those? Should we follow them with reason and hue to the healthy ones? Again how are the human rituals related to those of Nature? Besides exploring a spate of other waves of experience, poet Kiriti Sengupta in his latest book, Rituals, raises such basic questions, leaving at times explicit answers in the lines themselves. For example, in the poem “Faith,” the poet is overt: “Rituals do not add to our credos.” The poet speaks volumes for good rituals that have no religious association. Such a ritual as Rakhi Bandhan Utsav cements our relationship and inspires universal brotherhood. The poet verily observes  that Indianness has nothing to do with theology (“Indianness precedes theology”). This explains why people in multiplexes stand up to the tune of our national anthem.

Somewhere answers are covert between and after the lines. While journeying through his poems we, the readers think anew, redefine the old practices and traditions and instead of being indifferent to them, try to gauge their relevance and importance. “Masala Muri” points to certain practices that we miss now. With the vanishing of the lanterns and the rituals of gossiping together in a big family over a bowl of masala muri we have come far. Flanked by modern luxury, convenience and latest technology we are on the verge of losing the familial warmth and the rituals of cutting onions, spraying spices, and mixing them with muri.

The very first poem in the collection “Comeback” has, on the face of it, nothing to do with any ritual on earth. But on closer analysis, it is revealed that nature’s force like the sea in Synge’s poetic drama, “By the Sea” is also ritualistic in its destructive effect. Destruction of natural as well as manmade things is a sort of ritual that Nature does in her own way for her detoxification and regeneration. The rooms are obliged to be dusty, the paint is destined to be ripped, the filth will inevitably radiate bad odour to die out. The same experience of positive vibes echoes through Sengupta’s another poem, “After the Book Fair.” After the fair is over, new hopes come from the shelves, expectant of better sale in the fairs to come.

Though death proves our grudge fruitless, as in “Screenplay,” all is not lost. New lives will come through the expectant mother who will hold “a greased mango leaf, / blazed to kohl,” symptomatic of Nature’s policy of recycling the grey and the withered. This is how in some points rituals of both Nature and Man have the same frequencies leading to the same end. So while criticizing our mechanised living, Sengupta doesn’t lose hope and expresses his urge to go back to those olden days and to buy a lantern and share the joy with others in the family. Thus, his poems are eye openers to us. They are like mirrors that reflect our inner selves.

In “When God is a Woman,” the rituals of Hindus are talked about. Mixing a bit of soil into the “sinews” (here the diction is noticeable) of the goddess Durga may appear strange to some: it’s like worshipping the whore as a goddess. It is at the same time ironical that keeping these living goddesses confined to a cathouse or labelling their dwelling place as the most dirty red light area, once a year the hint of soil from the yard of the ‘courtesans’ is worshipped as goddess. There are, however, various implications behind such a ritual. While somebody thinks this ritual is to justify and sanctify the visit of the Babus to whorehouses despite their wives at home, a school of others thinks that the scripture advises people to worship the women folk including those at Bordello for the Vedantic belief is rooted in the immanence of God and His pervasive presence in all people irrespective of their faith, caste, sex and profession.

The use of the word “sinew” of Devi Durga who, according to Indian mythology, is born out of the respective strength of gods, is potential. It has an obvious hint of the fact that Durga needs the whore too to embolden her muscles for killing the demon. Doesn’t it mean that harlots have a big contribution to reducing the demonic forces of the world? Aren’t whores goddesses in a way? A world of thoughts has been condensed in the title and the powerful lines of the poem. We need much contemplation to decipher different other layers of meanings in the text.

Calling humans in the names of gods and goddesses or lending divine aura to one’s name is an age old tradition in India. Is this ritual protective of evil forces? The mysterious demise of the popular film star in the poem “Sridevi” raises this question. The tragic reality comes to the surface when Sengupta says, “I wish you had taken away / all the venoms when you left.”

The same image of a goddess and almost the same hint of irony have been extended in the poem, “The Untold Saga.” The worship of Devi Durga is a big ritual among the Hindus, where Devi is presented as killing the demon, Asur, with her weapons given by the gods. Nirbhaya who was locked in a fight with several demons in a bus in Delhi was also a woman. But the irony is she could not be called a goddess as she lost the ground succumbing to severe injuries in “her body parts.” Rituals, thus, makes us stand before the various truths of our life that in a very subtle way turn us judgemental.

If we look at the poem, “Anam weds Azahar” we find a Muslim ritual of posting the bride’s name before the groom’s on the wedding card. The fact that the general trend is just the opposite may be interpreted as an impact of patriarchy. Though Sengupta here seems to mention a fact without being opinionated, we may understand that these external rituals irrespective of religion are useless, unless there is a good bonding between the two souls who are all set to make a new home. In the poem “Male” again the legacy of males for performing the last rites of their parents is mentioned simply without any criticism. This economy of words on the part of the poet makes the implications far more profound.

Sengupta’s deft use of alliterations in such lines and phrases as, “In her sinews / hides a hint of soil” in “When God is a Woman,” “pits and precipice” in “The Heights,” “blanket of butter” in “Nascence,” “prefer patients” in “Dentures,” “fine fabric” in “Religion,” “lack luster” in “The Season,” “velvety feel” and “lavish lunch” in “Anam weds Azhar”  have lent an extraordinary grace to the beauty of the language.

Sengupta’s innumerable uses of personifications which at the same time create striking imageries are food for thoughts: “Sleep is now conscious like the attraction between mother and her newborn” in “The Resurrection,” “Doused Banyan trees await desiccation” in “On the Richter Scale,” “The sea longs for a rendezvous” in the third section of “On the Richter Scale,” “the dusk writes across the world of faeries” in “Anyday,” “three glasses retire” in “A Place like Home” deserve special mention.

The poet’s use of symbols is another interesting feature of this collection: “Masala Muri” becomes the symbol of familial warmth and “Banyan tree” stands for patience and perseverance. When “fractured noses” become the symbol of vain bragging, “the three glasses” in the bar symbolize three different attitudes to life. While “aircraft” symbolizes aspirations, “air pockets” stand for reality. Again the artificiality of modern life or the hollowness of man is hinted at in the title as well as the theme of the poem, “Dentures.”

The beauty of this collection lies also in the scattered seeds of monologue, confessional and anti-poetry. Apart from beautiful offtangent images, gleaned from assorted fields of study, Sengupta’s short lived sentences, and choice of succinct words have rendered Rituals a really unique work of research. 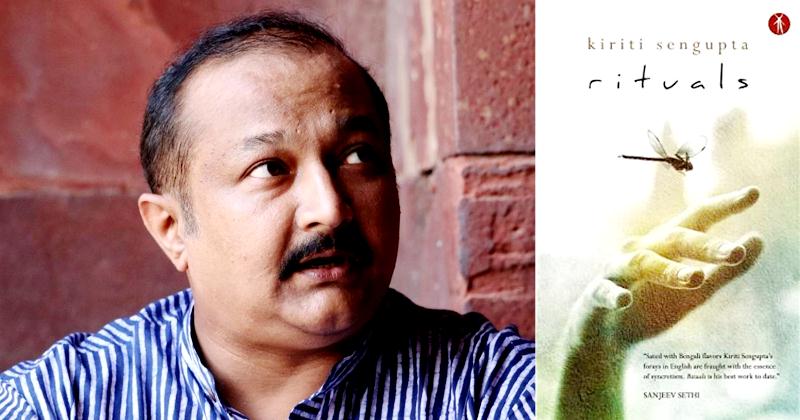 A teacher of English literature, translator, author of academic interest and bilingual poet, Utpal Chakraborty is a regular contributor to leading Bengali and English magazines at both home and abroad. His’ Concept’ containing critical appreciations of prose and poetry and his books on writing skill released by Kolkata based Nabodaya Publications have been well received by the teachers and the taught alike. Utpal’s Uranta Dolphin, an acclaimed collection of fifty five Bengali poems has been published by Signet Press. ‘The Mark’ is his recent work of translation published by Shambhabi.

My madness is mine alone

I continue with alphabets, full stops, and all it takes