Gait
a wispy ghost
of pumped up ego.

Clothes
cling on to
a drained frame.

Death of a Dalit Girl at Internation Salon

Braving more dust on the street, Thinker (in need of a shrink)
steps down, moves in heroic strides to the combat zone of
composite culture – International Hair Salon: cuttings, shavings,
dryings, dyeings, childrens, ladies, and gentlemans.

Thinker settles down on a deceptively cozy sofa, fishes out
‘The Location of Culture’ – Homi Bhabha against glossy
magazines that locate cultures and styles too easily.

Girlish giggles distract, lead his eyes to a tiny angel in blue frock,
eyes that sparkle at Princess Di’s smile and style, curly hair
that shine and smell of coconut oil, dark skin that glistens beyond
divisions, she runs back and forth –from mother’s tensed face used
to discrimination, to Princess’s grin used to voyeuristic lens stares.

She tries to stretch her hair straight, stands close to the mirror,
smiles better than Di, bends closer to see if the style could match
as well. Grumpy hairdresser, middle-aged, visibly annoyed,
shoos her away and she runs back in shock,
sad-eyed, to mother who wears a permanent Dalit face
– crow’s feet, caste engravings, grease, that defy make-up.

As her turn comes, the girl is ordered to sit on a chair too high
for her, no help offered. Smile vanished fully, she tries in vain
to give instructions – shortened, straightened hair that looks like
Di’s? – all ignored, scoffed at, her curls pulled harshly,
commented sour-faced how sticky they are, her mother given
sideways contempt, told of cheaper places for folks like them …
Thinker flinches in cosmopolitan, liberal humanist shame.

Her face, which was a lake with hope-ripples that could fill
a mirror, those eyes, darker than his brightest thoughts,
feelings that escaped her form – joy, excitement, of just being
in a new, magical place (of strange tastes and bias) – all dying;
a horror that surpasses all bloodshed witnessed willingly
in movies, YouTube and on rare occasions, real life.

No, no blood spilt – a clean job, a heart stops to tick, breaks away
from bliss, life, light extinguished from eyes which would see no more
magic, curls sheared too close in deliberate ugliness, her corpse
stalks with mother who’d left the corpse phase for a Dalit face.

A Dalit woman and the corpse of a tiny angel walk on, fade out,
dissolve to human dust, through the glass that frames
Thinker’s vision from International Salon.

“Sir, you like height of seat adjusted? We have catalogue here,
which style, which shampoo? Wash hair in cold or warm water?”
Thinker’s precious head feels safe and cold in caring hands,
the same hands that killed the girl, the same precious head
which did rest meaninglessly on a silly neck and watched it all.

Sex in the Time of Air Raids

Your fingers crawl on my chest, find their way
through limp hairs like a bunch of snipers
on a mission beneath sparse, uncaring foliage.
Skin reacts, softer spots yield to the ambush,
as fingertips pin them down. Your breath falls
in irregular designs on the side of my neck.
No more silence. I hear boots crushing
shards of glass on asphalt.
You say I imagine it – we’re seven floors
above the street, our windows shut tight, lights
switched off. As if we can fool the bombers
in the sky with a roomful of darkness!
You climb over me. Your weight falls on my body
like fluid. It tempts my hands to forage, no, to bring
the shapes under the radar, before sizing up
the danger involved in the act. I maneuver you
in a tight embrace, leave you no choice but to make
the most of it in kisses, and turn you over in no time.
I wish we could smell each other, but the a/c and
perfumes won’t let us – foreign agents making
even pheromone exchange a strategic procedure.
The booms and whirrs of the real world from above
excite me. Your right hand reaches out for protection,
and I mock you. We laugh together at the dumbness
of it in times like these. Sirens and alarms don’t
stop us from being trapped in each other,
lost in a battle of our own. Someone knocks
and shouts that there’s one-minute left
to escape (and die in the street?).
We labour hard, truly at it, to let it escape
from within. Heaves fight the noises that close in.
Hormones surge faster than the doom that descends.
Hapless bodies release their fears. Eyes move to bliss,
as the unknown powers we know too well
shake the room, the whole building, and suck us in. 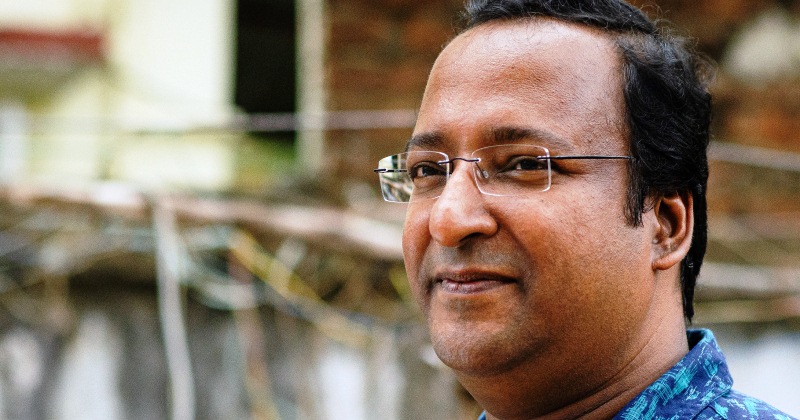 Jose Varghese is the author of ‘Silver Painted Gandhi and Other Poems’. His short story collection ‘In/Sane’ was a finalist in the Beverly Prize, UK. His second poetry collection will be published by Eyewear in 2020. His works have appeared in The Best Asian Short Story Anthology 2019, Unveiled, Unthology 5, Reflex Fiction, Flash Fiction Magazine,  Chandrabhaga, and Postcolonial Text. He was the winner of The River Muse Spring Poetry Contest, a runner-up in the Salt Flash Fiction Prize, a finalist in two of the Eyewear Fortnight Poetry Prize competitions, and was commended in the Gregory O’Donoghue International Poetry Prize.

‘I am a footstep on the slippery road’ : Five poems by Sameer Tanti

‘And we smelt like guavas’ : Five poems by Nilim Kumar

An observer walking on the sidewalks