The cane chairs,
on the verandah in Dehradun

mum dad I
sat outside looking at the

yellow sky which always
came by to say hello in August

It was just magical and mysterious.

somehow fixed on dad’s lap,
his belly and broad chest heaving,
made it feel like I was on a swing
mum in-between chatter and chai
we ran from room to room shutting
all the windows, doors, pulling clothes off the line

How many times in the last week

Did you look at the sky?
The other day a friend told me that

One could see the stars in my eyes.

But can they see the sky?

with newspapers stacked in one corner,
chai ke glass on the floor by each one’s chair

mine, of course with dad,
carefully making me sip the magic potion

that’ll take away my hard breathing

Do you think, you can give me some of your sky

What would it mean?

i woke up to thunder and nightmares last night

i went back to those nights after yellow skies,

by keeping them inside the house
the morning light after such a night was welcomed
a new plan of cleaning the mess,
the dead plants, semi broken pots was made each year

If you could save a few lives.
Would you try to save mine?
Would I make it to the list.
Not that I need a proof of affection.

Go ahead and save better lives.
Would you save mine by keeping my stories close to your heart,

By keeping my contact number and the name it flashes
By wishing I was there when you look at the sky,
By feeling me around when the first rain hits your palms.

Would you spare a sigh?
We save all that we can.
Sometimes, that’s all the saving one needs.

we save all that we can.
Sometimes that’s all the saving one needs, right.

my only wish before stepping out
was to witness the full moon
other than, of course,
spending the evening peacefully and
away from the regular bouts of anxiety

How much of those memories are left in you?
How much of it do you carry?
Do you divide the burden in two pockets and wear you high waist, low?
What will I find in the pockets, if you give me your jacket to keep me warm.

i remember not being in love with the moon
growing up it was always “look how the sun sets
and how it rises up again, look at the courage jazz”
but then how do you stop yourself from being in awe
of that thing which shines bright through the clouds,
is seen even when the sun is lighting up the sky,
doesn’t care if people are looking at it or not,
cares enough to light up the light-less streets,
and follows you in all the car rides, playing hide and seek
through tall trees, short hills, long nights,
dreadful mornings, difficult days,
numb but not-so-numb nights

The other day I was trying to read your eyes.
They were full of empty
I wished I was a little more than enough,
Then I would give you the extra
But how do I save you when I can’t save myself.
I could, I could give you my ‘enough’ but would it be enough?

my anxiety has made me doubt myself enough number of times,
has made me feel like the sun that has to burn even if it’s blistering,
my train of thought has run wild like the forest fire so many times,
and the sun’s heat has made it worse:
in moments when I am drowning in my own fire flood,
it’s the white that pulls me out like a tide
it’s my own personal ‘enough’
i will willingly give it up for you,
would that be enough?

How much ‘enough’ is enough if you want to save someone who is yours?

if i were to pin-point a memory,
it would be his
the last touch
i didn’t know that it would be last
i would have worked hard in extending the touch,
the time, the moment
but I walked away,
with hope anchoring my heart
into the pit of my stomach,
i should’ve known,
this wasn’t a good symptom

I don’t remember my last walk in my favourite city which I called home, first
You always either hope or have a hunch that you are coming back
How else would you explain leaving pictures behind, not meeting people, not taking the time thinking that you’ll have more in future

i remember the words I whispered last
“don’t go..” while walking away myself
my friend (who knows not of this particular loss,
i hope to god he never does,
these losses have a way of changing
the shape of your heart,
i don’t want growth at the cost of innocence,
who will console me if he knows the truth too)
consoles me saying that he hasn’t gone
and knowing very well I ask childishly
that I don’t see him
so how is he not gone

I remember my last ‘under the moon’ drive
I didn’t know that it was my last until I knew.
So I planned my so-called last ride.
Made sure I have the one by my side,
Who feels like me, and nothing more
And so much more when I need him to be.
I turned around twice and he was there,
How much more love could you ask for.

you can’t stop ‘going’
but can you stop from being ‘gone?’
when will you realize that the
only way to hold time is really to spend it? 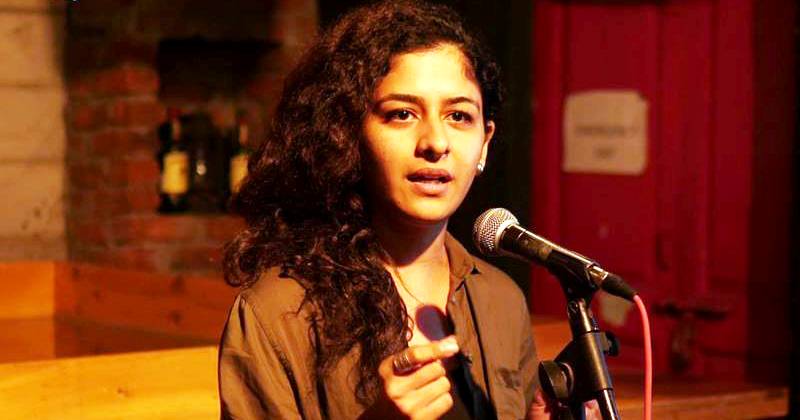 Kaushiki’s spoken word poetry has been recognised by prestigious stages like Kommune, Airplane Poetry Movement, and other forums. She is also a freelance writer who has written documentary scripts, plays and social media content for several companies. While she prepares herself for an MA in Gender Studies in the UK, she is currently working with an NGO protecting children as a writer.

‘Each word is an angel’: Six poems by Bhaben Barua

‘It was spring and we suckled dreams’: Four poems by Linthoi Ningthoujam

‘My words don’t have a house to live in’ : Five poems by Namrata Pathak