“On the surface, it might look like a crime and suspense thriller. But Suraj manages to infuse subtle humour throughout the novel to paint an incredibly realistic picture,” Usha Subramanian writes.

Suraj Laxminarayan’s Elephants in the Room is a thriller from the word go. We start off with one of the protagonists Nari who doesn’t have a last name throughout the book, setting out for a casual walk on a crowded street. Just as we see him wade through the crowd, he picks wallets from many and then stops to order food from a hawker right on that street using the cash from one of the stolen wallets.

“Ranganathan Street was not a place where you could snatch a chain and run for it because there were too many people who just couldn’t give way due to lack of space. This was a street where one robbed someone and probably walked right next to him or her to the very end of the street until it opened up on either end.” 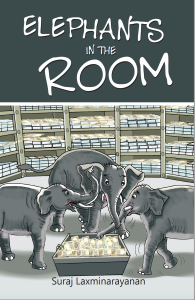 Despite being caught several times at this street, Nari takes the risk and walks through the unobservant crowd, in what we see is his effort to arrange money for a bigger job in the future. The world for the book is set, as the author brings alive Ranganathan Street for what it really is – a microcosm of Chennai where this story unfolds.

And just as we think that Nari is done, he is caught by the police right on the street, beaten up and thrown into jail.

Turn to the next chapter and we have Nari already pacing the cell in the station, scouring for ideas to arrange for the money they need in order to rob further, even as he has blindly assumed that he is going to break out the same day.

The initial chapters set the tone for a perennially risky and survival driven behaviour that the characters exhibit throughout the book. The story then moves on as we are introduced to more characters from Nari’s gang, who all don’t have last names throughout the book, an indication of their facelessness in the large city of Chennai that they dwell in.

“Actually … it is not loaded.”

The guard cringed at Assam’s response but smiled anyway.

Assam raised his eyebrows as if it was wonderful, shoulders lifting in

awe. “But it is certainly nice to carry one around …”

The guard rubbed his chin at that remark, his face contorting into an expression of confusion.

“Not really … It is heavy and just dangles on my shoulder.”

“That’s what the guard told me.”

“And you asked him that?”

Nari looked at him carefully for three seconds, weighing the extent of damage.

Assam, a name given by Nari and friends in an open admission to a generalisation of addressing people from the North-East, participates in the recce of the bank, finding out the shoddy security apparatus of the bank that isn’t far from reality as one knows. They make a floor plan of the bank and one of them even has an account in that branch. They will rehearse over the coming hours and summon the wherewithal to carry out the job.

As they run through the busy roads and walk through residential areas, Chennai becomes a character in the book, masking the men openly in its hustle and bustle. In the heat and humidity of Chennai that one almost feels through the writing, the group then goes to the bank to rob.

“All employees of the restaurant across the road rushed out. Vehicles on this side of the road slowed down. Two-wheelers stopped and riders got down from their vehicles. They gathered at the gate, stopping themselves at the boundary of the crime scene still in progress. They pointed hands, shook their heads, eyes beaming with palpable excitement.

They hadn’t planned for this. Rather he hadn’t prepared for this, realised Sarathy.”

In an indication of what is to come, Sarathy, Nari’s getaway driver grapples with lack of preparation, representing the gullible nature of the robbers – a sample of the set who have neither the knowledge or background to have planned for anything that follows. Things do not go according to script and plans are thrown down the drain. A cliffhanger situation ensues and suddenly, the characters face certain death by violence if not by law. Here then blooms the character of Vel, one of Nari’s gang, a gaana singer who is partially deaf and performs at funerals for a living and is now himself battling to survive.

“How did it matter when death was here for everybody, when it had trained him the whole time? Wasn’t he uniquely trained? Wasn’t he the recipient of a gift from death itself, the unique and only talent in this room of strangers, who could sing for the death of every man including his own?”

Death is a constant motif throughout the book and we see a musical and poetic rendition of it in the gaana songs. The songs capture the essence of each situation, and are a quintessential representation of the city of Chennai. This usage of gaana in the book becomes a unique way to set the mood, blending in with the characterisation while not alienating any reader by ensuring relevant translation.

For you shall not escape if Yama (God of Death) sets his eyes on you,
Lots of money in front of my eyes, yet only a coin shall travel with me to the grave.

(Otha kaasu refers to the coin pressed on the forehead of the corpse, indicative of the only wealth that travels with the corpse)

Jail on the left, Graveyard to the right,
In this half-cooked plan, even Luck has fled from sight.
(Mamiyaar Veedu or Mother-in-law’s house refers to jail in Madras Baashai)

The powerful become meek, the timid gain upper hand while the yo-yo of events keeps one twiddling one’s thumbs. This falls in place with the basic premise that the book handles, not just the bank heist but of contrasting leadership styles, the fall that comes with silencing dissent and allowing fear to take reign of actions.

“The building looks old,” said Nari, turning to Vel the engineer for a more informed observation.

Vel considered the statement and then replied. “Yes, it is cold.”

On the surface, it might look like a crime and suspense thriller. But Suraj manages to infuse subtle humour throughout the novel to paint an incredibly realistic picture.

Overall, Elephants in the Room is an enjoyable book and will leave you with memories that last a long time, especially the terrific climax.

Usha Subramanian is an avid reader, movie buff and a homemaker.